Pastor Oscar Peter Bougardt, the bigot from the Western Cape.

Why is it that hurricanes seem to bring out all the loonies, especially the religious kind?  Just last week I reposted I blog post that dealt with two bat shit crazy religious folks who blamed natural disasters on gay marriage and homosexuality.  But imagine my surprise when I found out that we in South Africa also have a nut job who clearly loves riding on the fanatical idiotic coattails of his likeminded American friends.  His name is “Pastor” Oscar PeterBougardt.  If the name sounds familiar, it should because this so called Pastor last year fervently stated that Arch Bishop Desmond Tutu was going to burn in hell because he supports LGBT rights.  One can conclude that the Pastor is a few dildos short of a homoerotic good time and that he also may not be the sharpest tool in the shed.  But seeing as this poor Pastor is really attention starved I have decided to give him some attention.  So lube up homophobe this is about to get rough. 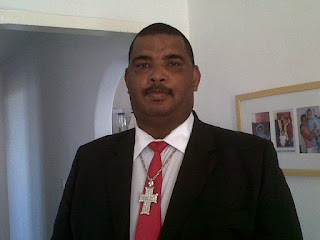 Last week, shortly after Hurricane Sandy devastated part of the United State’s East coast, our Pastor decided to post this Facebook status update for all of his 1 586 friends to read and I quote (spelling mistakes and all):

“President Obama wants the USA to accept homosexual marriages as normal. God spoke through hurricane Sandy, telling them not to mess with mother nature. Marriage is ordained of God and it is between a man and woman. For the USA or any country to accept homosexual marriages as normal is playing with nature, God id using mother nature to deal with evil countries. President Obama won't see another term in office, God will punish him. South Africa wake up, God hate sin, if this government don't scrap perverted homosexual laws, God will deal with SA as He is dealing with the USA. With all the weapons of mass distruction, and all the riches the USA have, they could not stop mother nature. God is God and He will not allow any country no matter how rich or strong to play with Him”.

Clearly the Pastor cannot comprehend what “Global Warming” is nor does he understand the effects thereof.  Instead he blames the gays.  Why is it that homosexuals and our right to marry could have such devastating effect on the planet whereas greenhouse gasses, pollution and carbon emissions don’t?  Secondly, if God was going to punish South Africa for our “perverted homosexual laws” how exactly is he going to do that Pastor?  With Hurricanes (which we never have)?  And earthquakes (which we also never have)?  Or perhaps fire and brimstone?  The latter seems more plausible if you ask me.  I guess, according to the Pastor, God will make an exception when it comes to Gay Marriage because according to the Pastor’s diligent research it is “unnatural” and an “ungodly sin”! 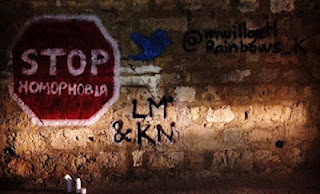 In another status update on the Pastor’s Facebook page he attempted to do a psychological analysis on gay marriage and I am sure this “copy and paste job” that he calls his “research” made sense to him at the time.  But this is the problem when an uneducated person commits plagiarism and foolishly makes unsubstantiated statements that were neither proven through scientific, sociological, anthropological or psychological research.  A good example of his idiocy clearly comes through in this statement he made in that status update, and I quote:

“Some male homosexuals claim that they look at other men the same way men look at women. However, scientific research indicates that in their brains, homosexual men "look at" other men the way women look at men. This tendency could indicate that at least some homosexual men might actually be transsexuals. They call their partners "husbands" because subconsciously they really want to be women.”

This is utterly laughable and only demonstrates his lack of comprehension of the complexities of the LGBT community.  It is dangerous for a person like him to make such statements and hold them as truths.  But what really disturbed me was his blatant hate speech.  As a person who claims to be a man of God, who is respected by the community in which he claims to preach the word of God I am particularly perturbed that he is abusing the platform he has been given and instead of building peace, tolerance and respect amongst his community he is preaching intolerance and hate.  What really pisses me off is the fact that his Church, the Calvary Commission Bible School in Mitchells Plain in Cape Town, is allowing this to happen.  Which begs the question, is his Church condoning the Pastor’s behavior, do they support his views and do they support his advocating violence towards the LGBT community?

In the one status update on Facebook by this Pastor that really made me lose my shit was the following that was titled “Homosexuals Are Cursed by God”:

“…Leviticus 20v13; If a man lies with a man as one lies with a woman, both of them have done what is detestable.  They must be put to death, their blood will be on their own hands.  I call upon the South African Government to reinstate the death penalty for rape, murder, armed robberies, drug smuggling, child rapist and child molesters and not to spare homosexuals the rod, execute them if they are caught in homosexual acts, their blood will be on their own hands…” 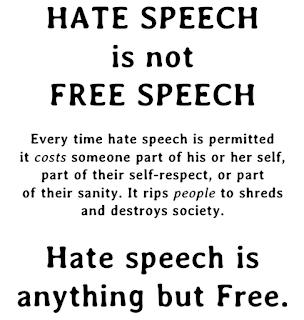 This is hate speech and incites violence towards the LGBT community.  I do appreciate that all South Africans have freedom of speech which we gained through our hard fought democracy and that all South Africans has the right to their opinions.  However, when a person of authority and a person who a community looks up to for spiritual guidance is leading them astray and advocating the execution of a minority group, surely somebody should intervene.  So I called on the South African Human Rights Commission to address this.  I sent them a heartfelt email reporting the Pastor for Hate Speech.  With hate crimes against the LGBT community on the rise, especially in the Western Cape, we really do not need another religious nut job to be advocating and even encouraging such violence to occur.  People like him must be stopped.

It seems like any Tom, Dick and Harry can call themselves Pastors these days.  And with “Pastor” Oscar Peter Bougardt it seems to be no different.  He claims to have completed a Diploma in Bible studies and that he was ordained in 2002.  He further claims to be a counselor and hopes to make a difference in the crime riddled area in which his ministry is based.  Sadly, it seems the only difference this man seems to be making is perpetuating intolerance, hate and homophobia in an area in South Africa that is already vulnerable to negative influence. Horrifyingly, in this case the negative influence is not from gang leaders, drug dealer or criminal syndicate, it is from a man who claims to be a man of God who’s heart is filled with hate.  Not the type of person I would trust to lead a community to salvation now is he?

An update 23 November 2012:  The Human Rights Commission of South Africa decided to react to my complaint and they are now investigating the matter.  Let's hope they make him stop! 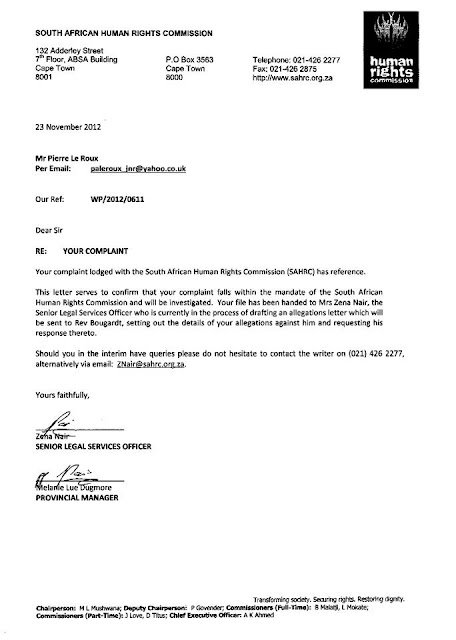 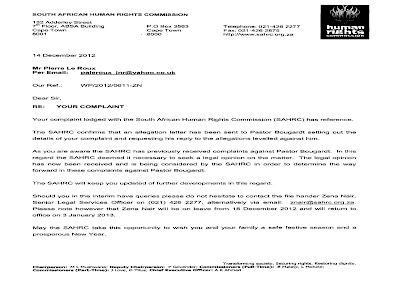 This shit is not on! behind you all the way!!! A certain "dominee" from Krugersdorp learnt the hard way not to mess with us pink people, I think this jackass should get the same treatment!

I agree, I think we all should report him for Hate Speech, seeing as his Church who employs him seem to condone his actions.

Everything is fun and gay until we lose our rights, right... I can not name one LGBTI person to ever say heterosexuality is a sin and we must put them to death. I think this pastor is gay, no straight man will wear a pink-ish tie and that much bling...Idiot