Russian Propaganda: Arrest me if you want to assholes!

Seeing as I was banned from the Russian Social Media site VK.com last week and my blog is about to be completely banned from Russia, I have decided to post this blog post as a FUCK YOU to President Vladimir Putin, courtesy of the blog Russian Propaganda. 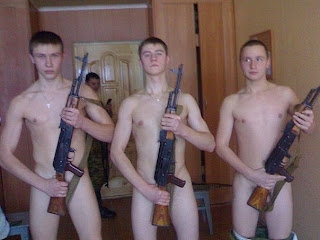 RUSSIA’S president, Vladimir V. Putin, has declared war on homosexuals. So far, the world has mostly been silent.

On July 3, Mr. Putin signed a law banning the adoption of Russian-born children not only to gay couples but also to any couple or single parent living in any country where marriage equality exists in any form.

A few days earlier, just six months before Russia hosts the 2014 Winter Games, Mr. Putin signed a law allowing police officers to arrest tourists and foreign nationals they suspect of being homosexual, lesbian or “pro-gay” and detain them for up to 14 days. Contrary to what the International Olympic Committee says, the law could mean that any Olympic athlete, trainer, reporter, family member or fan who is gay — or suspected of being gay, or just accused of being gay — can go to jail.

Earlier in June, Mr. Putin signed yet another antigay bill, classifying “homosexual propaganda” as pornography. The law is broad and vague, so that any teacher who tells students that homosexuality is not evil, any parents who tell their child that homosexuality is normal, or anyone who makes pro-gay statements deemed accessible to someone underage is now subject to arrest and fines. Even a judge, lawyer or lawmaker cannot publicly argue for tolerance without the threat of punishment.

Not surprisingly, some gay and lesbian families are already beginning to plan their escapes from Russia.

Why is Mr. Putin so determined to criminalize homosexuality? He has defended his actions by saying that the Russian birthrate is diminishing and that Russian families as a whole are in danger of decline. That may be. But if that is truly his concern, he should be embracing gay and lesbian couples who, in my world, are breeding like proverbial bunnies. These days I rarely meet a gay couple who aren’t raising children.

And if Mr. Putin thinks he is protecting heterosexual marriage by denying us the same unions, he hasn’t kept up with the research. Studies from San Diego State University compared homosexual civil unions and heterosexual marriages in Vermont and found that the same-sex relationships demonstrate higher levels of satisfaction, sexual fulfillment and happiness. (Vermont legalized same-sex marriages in 2009, after the study was completed.)

Mr. Putin also says that his adoption ban was enacted to protect children from pedophiles. Once again the research does not support the homophobic rhetoric. About 90 percent of pedophiles are heterosexual men.

Mr. Putin’s true motives lie elsewhere. Historically this kind of scapegoating is used by politicians to solidify their bases and draw attention away from their failing policies, and no doubt this is what’s happening in Russia. Counting on the natural backlash against the success of marriage equality around the world and recruiting support from conservative religious organizations, Mr. Putin has sallied forth into this battle, figuring that the only opposition he will face will come from the left, his favorite boogeyman.

Mr. Putin’s campaign against lesbian, gay and bisexual people is one of distraction, a strategy of demonizing a minority for political gain taken straight from the Nazi playbook. Can we allow this war against human rights to go unanswered? Although Mr. Putin may think he can control his creation, history proves he cannot: his condemnations are permission to commit violence against gays and lesbians. In May a young gay man was murdered in the city of Volgograd. He was beaten, his body violated with beer bottles, his clothing set on fire, his head crushed with a rock. This is most likely just the beginning.

Nevertheless, the rest of the world remains almost completely ignorant of Mr. Putin’s agenda. His adoption restrictions have received some attention, but it has been largely limited to people involved in international adoptions.

This must change. With Russia about to hold the Winter Games in Sochi, the country is open to pressure. American and world leaders must speak out against Mr. Putin’s attacks and the violence they foster. The Olympic Committee must demand the retraction of these laws under threat of boycott.

In 1936 the world attended the Olympics in Germany. Few participants said a word about Hitler’s campaign against the Jews. Supporters of that decision point proudly to the triumph of Jesse Owens, while I point with dread to the Holocaust and world war. There is a price for tolerating intolerance.


(Please support Russian Propaganda by visiting their website, reposting/re-blogging their posts and keep the message of the atrocities propagated against the LGBT people in Russia in everybody’s minds.)